The New York Times "The Morning" (March 28, 2022)addressed the issue of the immunocompromised, who have ineffective protection with Covid-19 protection. There is a drug called Evusheld, developed by AstraZeneca, but no one seems to know about it. I blogged about it right after I received my two injections. It provides months of protection. 850,000 people could get added protection but about 80 percent of the doses are sitting in hospitals, warehouses, and pharmacies unused.

We need a plan, people! 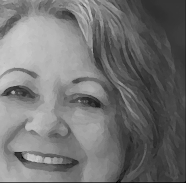 I was a creative director and art director for many years until I switched careers and became a university professor at Arizona State University and Purdue University. I had a research and development lab “The IDEA Laboratory,” which focused on creative thinking, interactive media, and animation.

I used to be referred to as “the EverReady Bunny” – highly energetic and productive. One day I went to my internal medicine physician complaining of fatigue. I thought I either had mononucleosis, was working too many hours, or was feeling the onset of aging. He did a blood test and found my white blood cell count to be elevated. He ordered a cytometry test and thought my diagnosis of CLL/SLL was a mistake, because I wasn’t a white 75 year old male. I was a Eurasian (Half Japanese and half German) 57-year-old female. He had a physician friend review it again under the microscope to confirm the diagnosis.

Dr. Chadha said that we are all dealt a different hand of cards from the moment we are born. It is not what we are dealt that is important, but how we play it. Wise words…

I was told that some people with CLL/SLL live 20 years plus and die with leukemia, not from it. All would be well, as long as I was not diagnosed initially with 17p deletion. According to one expert, an initial diagnosis of 17p deletion would mean I would be hospitalized within six months of diagnosis and would not live more than two to three years. I wanted to be one of the “lucky” ones. I found out a month later from a FISH test that I was not. I was diagnosed with 17p deleted, chemo-resistant leukemia. In 2009 there were no options for me. I was given a poor prognosis.

I persistently researched and networked with leukemia experts around the country. I not only got a second opinion, but also a third and a fourth. Dr. Michael Keating (the father of FCR) at M.D. Anderson in Houston took me on as a patient and has kept me informed on the research that is being done on 17p deleted patients. Dr. Keating told my husband Carl and I about Ibrutinib (PCI-32765) when it was first being tested.

Along my journey I have also run into a few Dr. Buzzkills. That is the term of endearment Carl and I have given to physicians who have poor bedside manners, who have coldly reminded me of my impending death, or who have been ticked off because I have ruined their research by being an outlier on the statistical charts. People, it is YOUR life! Do not sit idly by. Be actively involved in your health decisions.

God only knows why I have been so resilient, but I am here today. I am a person of faith, who also loves science. I believe in the synergy between body, mind, and spirit; therefore, I believe in modern medicine and complementary treatments, such as Reiki, reflexology, meditation, prayer, and herbal supplements. I also know that the only thing I really have control of is my attitude.

I feel blessed to be B22 in the Ibrutinib (PCI-32765) clinical study in Bethesda, Maryland. This blog is a testimonial of my journey with the BTK inhibitor.